Rhode Island has seen its fair share of vice presidents over the years, whether they were still on the campaign trail or visited after taking office.

In the above video, 12 News reporter Kim Kalunian looks back at the previous vice presidents who visited the Ocean State in the past.

Reed, Whithouse pick Zachary Cunha to be next US Attorney for RI

Firefighter unhurt after fall through floor during East Providence fire 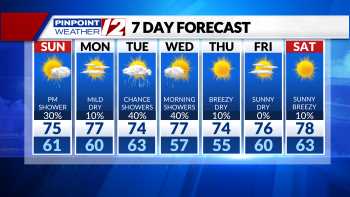